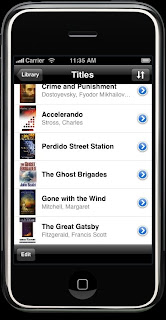 I've been wondering about getting a Kindle, especially in light of just having moved my heavy, boxed-up book collection to a new house. Ouch, my back! But the $400 price tag is a real barrier for me, and the utility of having just one mobile device for phone calls, contacts, calendars, Web surfing, iPod (music, movies, audiobooks), and various other data and applications is hard to give up.
The iPhone's answer to the Sony eBook Reader and Amazon's Kindle is Stanza, an application which allows eBooks of various formats to be saved natively and read on the iPhone, even without an Internet or network connection. It also allows direct downloads from many different publishers. But the form factor for reading is smaller than the Kindle or eBook Reader. So the question remains: To Kindle, or Not to Kindle?
The author of this article makes an excellent point:

[T]he ebook is software and I have little doubt that I’m right about this. There will be some people who are prepared to buy a Kindle (or the Sony equivalent) in order to have a device that’s purpose-built for reading books. But if you can get equivalent functionality from an iPhone or iPod, then you’re not going to be happy to pay over $300 for the Kindle just for the privilege of buying ebooks. If ebooks were difficult to read on the iPhone/iPod then Stanza would already be dead in the water, but that’s not the case.

There’s already a Beta version for Google Android and one will likely be developed for RIM. There are also versions for the Mac and Windows...

Amazon missed a golden opportunity to leverage both their brand and the popularity of the iPhone (and Google's Android, for that matter) by not launching an ebook reader application of their own. They could have totally pre-empted Stanza. But now they have allowed Stanza to get a significant market jump on them in the software e-reader market, one that may be too much to oevercome.

I think I'll stick with my iPhone and Stanza for a while, thanks, Amazon.