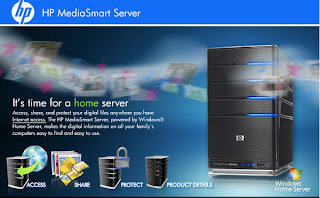 I have long awaited the release of an official Apple device that would allow me to record, store, and share my digital media (photos, music, and movies) wirelessly with all of the TVs and computers in my house, and even sync to my iPhone, but without hogging up storage space on my family computer.

AppleTV? Nope. Apple's Time Capsule? Nope. ReadyNAS? Nope. (UPDATE: Things may have changed.) But now HP has released a version of their popular home media server that says it is Mac-friendly. We'll see.


Caveat emptor, as the Engadget flame-throwers are dissing it a bit (of course, consider the source).

There are now other wireless combo NAS and media-server solutions for Mac that didn't exist 2 years ago, when I was looking diligently, including:

This one is probably my favorite so far (my buddy Joe has one):

We use my wife's Macbook with 250GB drive as the "family" computer, while my MBP is my "work" computer. I have experimented with sharing the iTunes library over our wireless LAN using Bonjour, and it works well. I point my MBP's iTunes Library source to her computer's iTL over the LAN, and it streams audio just fine; have not tried video. I have not yet tried syncing my iPhone to my MBP, yet, but will do so in the near future. Our Contacts and Calendars are synced via MobileMe, so I only need to sync up media. Other people do something similar; they just use an old Mac (or even PC) to be their iTunes media servers.

If you have played with this stuff, let me know what you are using.

[UPDATE: And here is another one!]
Posted by Curtis Wayne at 6:00 AM