The Device has arrived (almost) 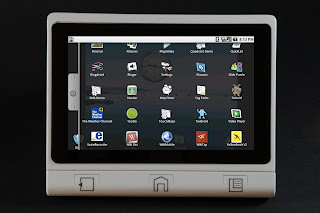 A few years back, one of my favorite tech gurus wrote a great essay called Mobile Phone as Home Computer. He referred to The Device, which would be essentially the "brains" of your computer system crammed into a mobile phone, which could then be plugged into various screens, keyboards, TVs, and other accessories, at home, at the office, in your car, and on the road.

Portable USB stick-drives on steroids, basically. With a phone.

Well, guess what? The NIMble, from Touch Revolution, looks very much like the precursor to Greenspun's device.

My wife has limited call for an actual computer, these days. Mostly what she needs is Web access. Her email is Web-based, and she refuses to us a local client to download it, preferring to log in each time (don't ask my why). With many of our photos stored, and even editable, online, what she really needs most is a Net-enabled terminal. If that terminal was also smart enough to run Google's Android, and provide additional functionality, like making phone calls, so much the better. NIMble fits that bill. Ditto for the kids.

The next step from here, and it does not seem like a leap, is for the NIMble to ship with a mobile phone handset that syncs data (music, GoogleDocs, contacts, calendars, and to-do lists) with the mobile phone. Right now, Google's mobile operating system is only missing an answer for the iTunes Store, but Amazon is working on that.

If da Goog were to partner up with record labels or movie studios (hey, why not? Apple did it in 2000, when it seemed crazy), then we could be very, very, close to Greenspun's Device, and then some.

Apple, are you listening?
Posted by Curtis Wayne at 8:49 PM